This is a great hike up into the mountains above Kennicott. It combines amazing views, including views of the Kennicott and Root Glaciers, with the opportunity to see some of the mining history of the area.

The hike starts in downtown Kennicott. It follows an old mining road the whole way up to the mine. Perhaps the one downside to the hike is that it takes a bit longer to get above tree line than the typical Alaska hike; probably somewhere between mile 2 and 3. Below tree line there are occasional views of the valley; once you get above, the views get pretty impressive. There are lots of old mine-related structures near the trail and nestled in the surrounding hills. Most interesting are the remains of a tram system that carried the ore down to Kennicott from the mines. Bonanza mine itself is a very cool, partially collapsed structure perched just below the ridge. Relics of the early twentieth century are strewn all over. The ridge just above the mine has some great views to the north that are not otherwise visible on the trail. Just be prepared for less than a 360 degree view: the actual summit of Bonanza Ridge towers another 1,000 feet or so above the ridge that the mine is perched on. It doesn't look possible to get to the true summit without climbing gear.

The trail is generally well marked, but there are two intersections without signs. Near the beginning of the trail there is an intersection where you can go straight or take a switchback up the hill. Take the switchback. Going straight leads to the top of the big mining building in Kennicott (worth a look). The second intersection could be confusing on the way down. About halfway up, you'll pass a plausible-looking trail leading right. Although it clearly doesn't go up the mountain, it could lead to confusion on the way down. Make a mental note. The mosquitoes were really bad below tree line. Bring bug spray.

Judging from the amount of bear scat we saw, bears like this trail almost as much as people. The thick brush on either side of the trail for the first couple miles would make it very easy to surprise a bear. Definitely a good idea to make noise.

There is no water for the first 2/3 of the hike.

Kennicott and McCarthy are both worth checking out spending some time in.

The hike to Jumbo mine (branching off from the Bonanza Mine trail a couple miles up) is supposed to be great as well. It's a bit longer (5 miles) with slightly less elevation gain.

You can't actually drive to the trailhead. You have to park at the end of the McCarthy Road and either walk, bike, or take the $5/each way shuttle bus to Kennicott. 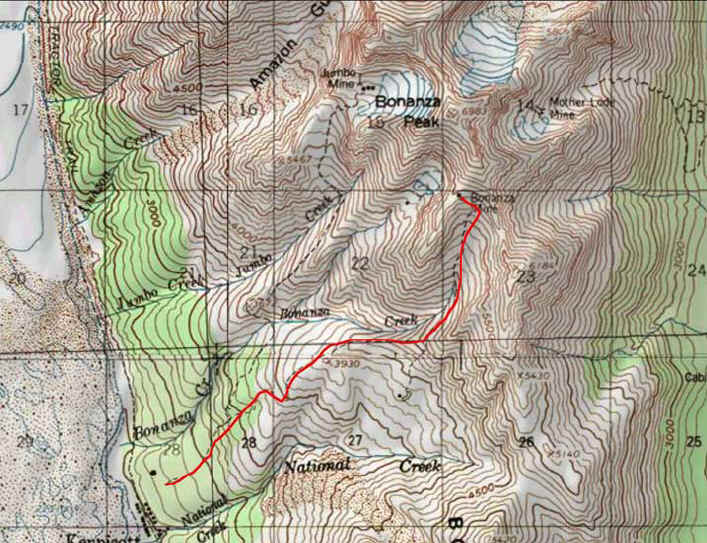 Comments on hiking Bonanza Mine Trail