Let me first say that in my opinion the Alpine Trail is the most under-rated and under-used hike in the peninsula. I spent the entire summer volunteering as trail crew out at Caines Head and this was by far the best kept secret. I also had the opportunity to backpack throughout the peninsula on my time off and would best compare this hike to Lost Lake.

To reach the Alpine trailhead from North Beach, head .25 miles back towards Derby Cove. A small sign and a kiosk mark the starting point.

The trail soon thereafter starts the slow climb up to the alpine area. It weaves throughout the gorgeous forest crossing numerous streams and a large waterfall. Panoramic views of Resurrection Bay and its gorgeous mountains begin at about mile 1.5.

After ascending a series of switchbacks and weaving through the waning forest, the hike breaks through the treeline into the alpine area. From here, un-limited views await as your jaw drops at the beauty of the scenery below. Excellent views of Callisto Canyon, Callisto Peak, Thumb Cove (Spruce and Porcupine Glaciers), Caines Head, and the numerous islands that dot the entrance to the bay and the Northern Pacific beyond.

The trail then follows a series of rock cairns weaving past the alpine ponds and streams up to the base of Callisto Peak. For the truly adventurous, it is possible to ascend the valley to the south (left) of Callisto Peak and view stunning Bear Glacier below as it spurs off of the Harding Icefield into Ailak Bay. No trail is marked up the mountain, but it is unnecessary as it is fairly gradual and well above the treeline. The hard work is definitely rewarded.

On another note, as of August 2004, I cleared a new trail linking South Beach and the Alpine trail. If heading up on the Alpine, watch for signs pointing south (left) towards South Beach after about 1.25 miles. The trails weaves through some really cool sections of forest, past/across numerous creek chasms and waterfalls, and ends up at the south end of South Beach. The trail is easy and is about 1.5 miles from the junction down to South Beach. If starting at South Beach, head towards Rocky Point and look for a bright orange trail "T". Soon thereafter another sign indicates direction and distance. The trail is nice as it creates a loop around the park, so as everything doesn't have to be a straight out and back hike.

This past weekend I finally got to do this hike. I got into North Beach late Friday night. After a lazy, dawdling Saturday morning, I put together a daypack and headed up this trail.

Phil does not lie! If he hadn't given this 5 Moose Hooves, I would have bumped it up. This is a great trail! If I had to choose between the fort and this trail, there would be no contest. Even the forest, canopy part is beautiful as well as very peaceful and relaxing. As the views open up, there are fields of lupine. However, the top is sooooo cool! The views really are incredible and 360° to boot. While up there I saw eagles and hummingbirds up close. You could spend hours up there checking out all the cliffs and ridges, with different views and terrain. In fact, I plan on coming back in August and backpacking up there so I can spend more time to explore. I'm guessing that since the tarns up there are so shallow, they would be warm enough to swim that late in the season.

Listen to Phil and me and PUT THIS ON THIS LIST!

Since Caines Head is a fairly popular destination for backpackers (especially North Beach), if one wants true solitude, I would highly recommend the Alpine. Water sources are abundant as there are countless streams and ponds. Flat mossy areas for tent sites are also infinite. However, as one is camping above the tree line, they must realize they will be extremely exposed to any incoming weather, so pack accordingly. I have set up camp on a cloudless night up there, only to wake up in the morning in the middle of a rain cloud with limited visibility.

Speaking of which, I wouldn't recommend this hike on a day with low cloud cover, as the views will all be obscured. The Fort or South Beach would be a better hike when low-cloud cover is around. And if one is planning on hiking up to the Fort, DO IT FIRST! If hiked later, it will be extremely anti-climatic as one stares down at the Fort 1,000 ft below when on top of the alpine.

Bear safety must also be a priority when up in the alpine area, as it is not rare to see 3 or 4 bears. All have acted appropriately when encountered, but be aware and practice strict bear safety.

Snow remains in the alpine area until mid-June, and the trail can be hard to follow when snow cover is deep.

*Webmaster's Note: A big shout out to Phil for, one, informing me of these trails. I was unaware these trails even existed. *

An even bigger shout out to Phil for doing this volunteer work. Alaska owes a big load of thanks to these young people who come from all over the country (including Alaska) to do this grueling work. Phil sent me the below note when he sent the photo above:

"I also cleared a new trail system out in the Yakataga State Game Refuge 120 miles east of Cordova. the area is gorgeous as it is dominated by the Bering Glacier (biggest in North America) and Lake Vitus which it calves into. Unfortunately the plane flight is spendy and the brown bears are thick! On the upside, the scenery is amazing. Two new public use cabins were built in 2002 through grant money and we went out and cleared trails (8 miles) connecting them, an airstrip, the Bering Glacier, Midtimber Lake, and the gulf coast." 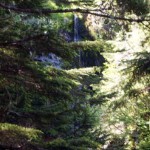 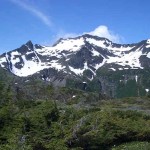 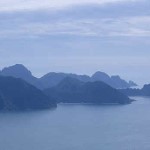 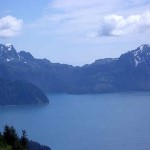 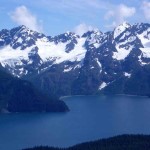 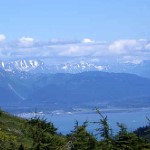 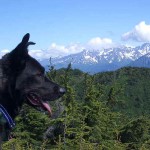 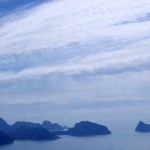 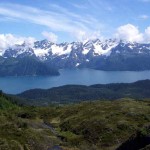 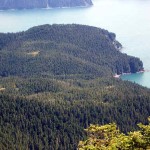 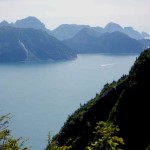 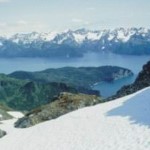