The weekend when I did this hike, it was one of those Alaskan, weird weather days. It would go from drizzly and cold to warm and dry within minutes and kept changing back and forth all day. Sometimes I was out sitting on the tundra; five minutes later I was in my tent under the sleeping bag. Still, it was a really great hike and it was one of the most scenic and enjoyable new trails that I've done in awhile.

When I first moved here in 2000, I heard it was overgrown and a real hassle. In 2004, there was a complete cleanup and overhaul of the trail. There was no excuse now but to check it out. Of course, with a name like Devil's Pass, I assumed my butt would be whupped by the time I got up to the Pass - a trail with the same name in the Shenandoah's lives up to its rep! - but it was very easy, and a group with young hikers would not have a problem but for the distance. Most of the trail is wide and smooth, which is nice because you can really focus on the scenery.

This is one of the few hikes in the Chugach National Forest that you don't have to walk under canopy for miles before getting great views. The trail basically goes up a deep "V" notched valley with lush forest slowly converting to tundra as one goes higher. The trail follows the upper ridgeline of one side of the valley (it switches over to the other side the last 2 miles). Midway is a waterfall, that if it wasn't cold, I would have ducked under for a great refreshing break. Because you're up high, you get great views of the valley and the surrounding Kenai Mountains. The scenery is awesome and non-stop and gets better and better as you climb up. The views look great coming down as well.

Eventually, as you get into tundra, the valley opens up and you are officially at the Pass. There is another valley immediately to the right. Next time I come, I plan on heading into it and camping by the hidden tarns for some real solitude. The Pass is filled with a lot of tussocks but the trail makes the passing smooth. Once we got to the Pass, my dog had a ball chasing the tons of marmots hanging around. We could hear them whistling all day and night.

You then come on Devil Lake which is a megopolis for beavers! Starting with the first lake and going for miles into the the Resurrection Pass Trail is a network of dams and dens. It's pretty awesome. Ironically, for all my backpacking and being out in the wilderness, I've never actually seen a beaver, even though I've seen their homes for years. Well, while camping at the lake that night, I finally saw one swimming around. I was surprised how small it was because I thought they were much bigger. About 15 minutes later, another beaver came by and I realized that it was one of the parents and that the beaver I was watching was one of its kits. Both kept on flapping their spatula tails against the water as a warning to others that I was nearby. I even got to see them swimming the next day.

Speaking of the lake, I had hiked all the way to the end of the trail where it meets with the Resurrection Pass Trail. The view is gorgeous and there is a very cool A-frame cabin (although why they didn't place it with the windows looking out on the views, I'll never know). Unfortunately, I didn't find a really good place to put the tent up and the designated site a mile down sucks! So I hiked back to the lake and camped on the side opposite the trail. It was soft tundra and very inviting.

The trail would make a great, almost-loop hike with Resurrection Pass and Summit Creek Trail. If you didn't have another car, the two trailheads are only 3 miles apart on the Seward Highway. An overview link is provided on the Map Page. Car-wise, this would be a lot easier to deal with than the whole Resurrection Pass Traverse. You can do more of the Pass than just the section between the other two trails.

Biking looks awesome! I hope to try it some day!

Like I said above, this is serious beaver country: filter your water!

There is a designated campsite 1/2 way up but since you're in the woods, I'd make the commitment to the lake.

There were no good places to tie up food and this is definitely bear country You may want to bring a bear proof canister. However, at the designated site at Resurrection Pass, there is a metal bear box.

To reserve the cabin, go to Recreation.gov.

If you'd like to learn about beavers, go here. 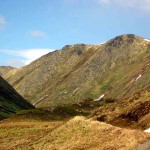 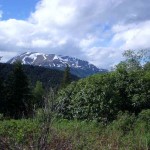 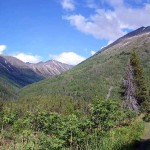 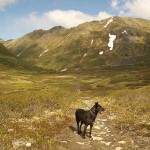 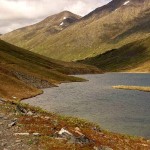 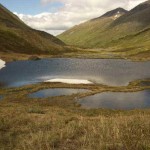 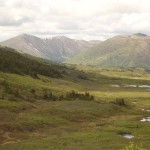 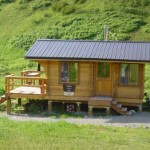 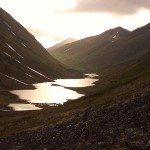 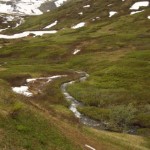 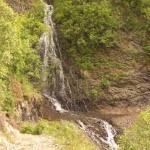 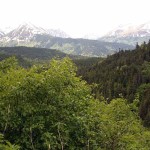 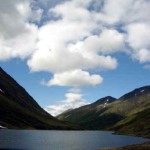 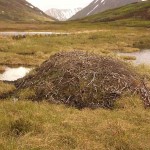 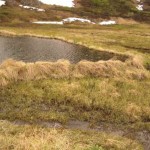 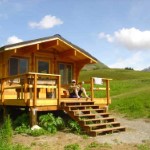 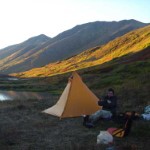 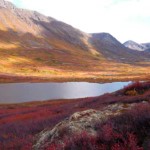 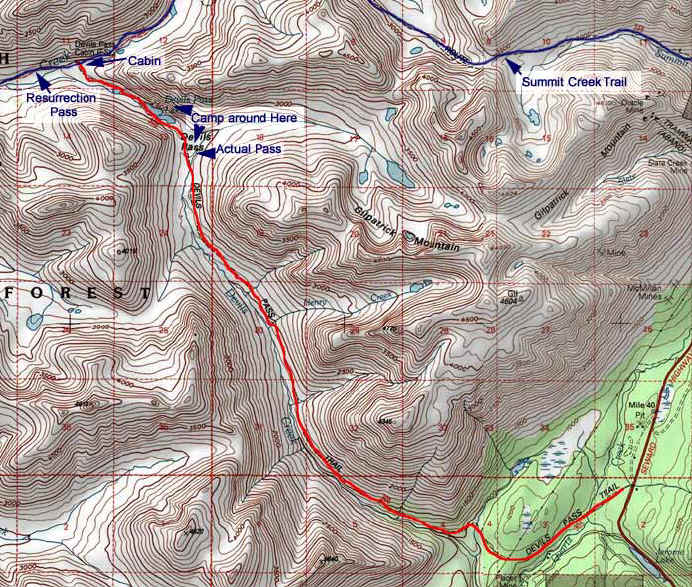