Please use the book "50 hikes in Alaska's Chugach State Park" for reference with this description. I decided to take on Pioneer Peak on a HOT (80+), late June day. The hike starts along Knik River Road near Palmer. The mountain appears VERY imposing from the Glen Highway, but you approach it from the back, where there is a long steady climb along a steep ridge. The 2001 edition of the book says the Knik River Road is a dirt road, but it is paved-- that was confusing.

Anyway- you start at 200 ft elevation at the nice trailhead (no toilets or water though). Most people stop either at a picnic table (yes a picnic table) at about 4800 ft (?) or at a saddle at 5200 feet. The books talk all about the picnic tables placed along the way-- they sure are nice distance markers and also make for nice tanning beds! But one book says there are four, one says three. I saw three-- I think maybe the top one is gone now, probably burned by some idiot.

Well, the trail is in the forest at first, then it is in nasty wet alder forest with little creeks. Like a little Alaskan jungle, except I was lucky and it was not too overgrown-- I never touched Devil's Club or Cow Parsnip. It was very muggy however, and buggy. The first picnic table is about a 1/4 up, and it was welcome because it was near the treeline. It just got better from there-- another picnic table marked the transition to thick alpine tundra and then light alpine tundra, then that third one and then it was all alpine ridge walking. But it was REALLY steep the whole way. I consider myself in okay shape and I was dying.

You finally reach the "top" of the normal hike-- a beautiful saddle with some snow still left to refill your water bottles. There is a little direction sign here with the elevation. Problem is, the South Summit beckons any good Chugach scrambler. So it was 5pm, hot as it could get, and I decided to press along the rough ridge to the summit. It was longer than expected, and loose rock with steep falls the whole way. I finally reached the base of the South Summit-- then it was a total scramble to the top-- I felt pretty risk-exposed for being by myself, more so than most of the other day hikes I have done up the likes of Ptarmigan or O'Malley. Maybe it was the near sunstroke conditions. I went through 6 liters of water! Some super cool older lady passed me as I was coming down- just kind of strolling on up!

So, in my book, there is no excuse for not bagging this peak if you are so close when you are at the final "official" point, but I would do it with a friend, and maybe on a cooler day. It was a "Jell-O leg" ride down, which was when I realized how steep and long the initial super long ridge climb was.

Total time 6.5 hours, with many short breaks. The views are spectacular! And you can always look at those imposing twin peaks on your drive back from The Valley and say to yourself-- I was up there, 6400 ft. later!

Only hikers in good shape should attempt, even to the last "official point" -- it is tougher than, lets say, Flattop's second stage (to the second saddle) the whole way, but about 5 times as long. Only hikers who enjoy scrambling with some danger should go past that point! Snow patches were small but still around in late June. Bigger one at the last official point- should give water throughout the summer for the final peak hike (but don't quote me on that!)

Bring bug dope for the jungle! 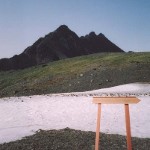 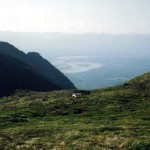 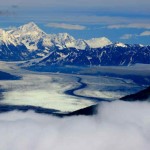 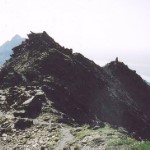 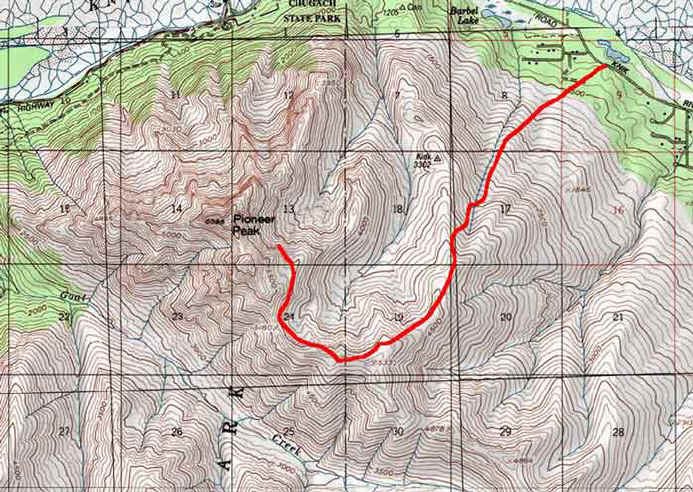