A nice "no hassle" hike along a beautiful aquamarine lake. I like to do this trail early in the season when I'm dealing with some stress and I just want to get "out there". Views include two small glaciers on the mountain on the north side of the lake. The trail starts at the Ptarmigan Creek Campground and can be traveled as a day hike if so inclined. This is a perfect trip for beginning backpackers or people with children. It also makes a nice preseason hike.

The first time I did this hike, there was too much snow on the trail when I got to the lake so I set up camp by the mouth of the creek. The next year, much later in season, I got to the end and really thrilled to a beautiful colored lake. The third year, too early in the season, I actually walked over the frozen lake to get to the end.

Once you start hiking along the lake, you're committed: there are no good sites until you get to the end where there is a nice sandy flat area to set up your tent. Ford the narrow but deep creek to get to the area.

If you're only going to the west end of the lake, hook around the corner. There are great sites at the mouth of the creek.

There are fish in the lake; make sure you are educated about fishing regulations for this area if you are so inclined.

Be aware of hunters in search of bear in early season.

Also in early season, be avalanche aware along the mountainside part of the trail. I saw the aftermath of a huge one the first time I hiked this trail. It was nothing but a huge wide gash in the mountain of mud and ice.

Haven't been here in awhile. I really wanted a reason to drive down the Arm and camp out somewhere and I knew this place would be snow free. They cleaned up a lot of the dead trees by the lakeside trails and I discovered a campsite that I didn't know existed. It was a great site on a cliff with a great view of the lake. It's just about 75 yards down the trail where the lake starts. I did hike almost to the end of the lake but then turned around realizing this site on the cliff was where I really wanted to stay. I had a great book and it was a real peaceful time. Since it was lightly drizzling on and off, I got to setup my new siltarp canopy.

There was amazing amount of bear scat on the lakeside trail with portions giving you limited view. Make sure you make a lot of noise.

This was the first time I did this hike in season and was quite surprised by how many people were camping. Voices were really carrying over the lake so if you're looking for real peace and quiet, you won't get it unless you go to the end of the lake.

Anyway, here's my updated skinny on the camping:

When you get to the lake, there's a primo site to the right nestled in a group of boulders. As stated above, you could also camp by the mouth of the creek just down from this site.

Up just a little ways from where the lake trail starts, on the left are designated sites. While the view is good, the sites are crappy and I would only camp here if I absolutely had to.

Continue on the lakeside trail and you'll see the cliff site. You could also camp on the beach below but you'd need something to cushion the rocks.

About midway on the lake trail is one flat area to set up camp and a sort of semi site off of a game path. Neither one would be my ideal.

And of course, lots of flat area at the end of the lake to enjoy.

It was announced in 2002 that this trail will be incorporated into a loop trail with huts. As of November, 2003, this project has been put on hold due to budget cuts. In 2006, I heard rumors of its return. 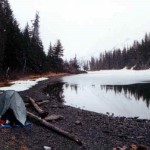 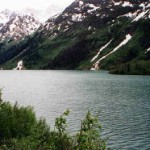 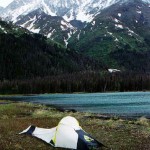 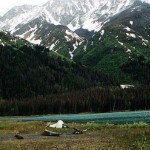 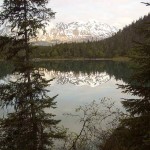 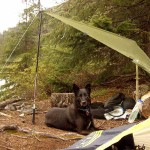 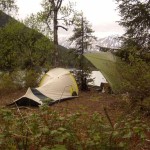 Distance
7.5 miles
From Anchorage
97 miles
Season
May to October (snow may be too heavy at lake in early season)