I’ve seen this trail on my National Geographic Map for years now but have never seen any information on it anywhere; neither on the Chugach National Forest Website, nor any guidebook. A quick search on Google turns up a few paragraphs in a Kenai local paper. I assumed it must not be well maintained and was probably only used by hunters. I imagined endless bushwhacking and constant stressing over bears. I called the ranger station and they told me it was maintained but didn’t have much to say. I finally decided to try it and if it sucked, I would head out and go down the road to Devil’s Pass. Well, survey says: this is a great hike! I liked this trail much better than Devil’s Pass as it gives me more and quicker of what I want in an Alaska hike; endless tundra. While the beginning of the trail has sections with tall grass, there is no bushwhacking and the trail is obvious and easy to navigate.

The hike is basically 3 glacial valleys with the first a rocky and shrub filled area with a huge cirque off to the side filled with a small tarn, the second with 2 lakes and lots of lush greenery, and the third a soft tundra with a huge football field like valley and long moraine. The pass between the first and the second valleys is spectacular with cascading creeks, jagged rock formations and endless views. The last valley is awesome and reminds me of the Circus Maximus in Rome. There are marmots everywhere! My dog was quite tuckered out trying to chase them all.

There are plenty of places for solitude with lots of hidden tarns, and moraines to camp behind. The opportunities for exploring and day hiking after setting up camp are endless! Most of the surrounding mountains and terrain are very accessible with gentle slopes to their summits. There is endless soft tundra scrub to make camp on. My favorite is the white, coral looking scrub, known as chalcodonia, which is firm like a mattress.

Unless you’re doing the trail to access Resurrection Pass or doing the loop hike (see below), I would only go to the saddle overlooking the Pass (it’s worth it for the view) and then head back to the valley and camp there. Or better yet, find your camp and day hike to it later. I picked the top of the moraine near the hidden tarn (you can see it from the saddle). I had a 360-degree view of the entire third valley and into the second and it was gorgeous. After dinner, I headed up the mountain where the tarn was for better views.

I would have done a lot more exploring but the weekend I was there, intermittent thunderstorms were occurring. Luckily my tent was all set up and most my stuff inside it when the first storm came. But actually, it was quite cool because there was thunder and lightning, a very rare event in Alaska! I was in the perfect spot to view the lightning as it hit all over the mountain ridges. I’ve heard thunder maybe about 10 times in the five years I’ve lived in Alaska but I never saw lightning till this trip. At one point in the early evening, there was a real deluge for a few hours and my tent started leaking, but then it stopped. The clouds rolled away and the sun came out. I dried everything out and then spent the rest of the night sipping wine, reading my book, and enjoying the views while my dog and I laid down on the soft tundra.

All in all, it was a great weekend. I definitely plan on coming back adding an extra day of base camping and hiking all around.

Just got back from an overnighter. I am even more in love with this area than the first time. It would take about 50 backpack trips to explore all there is in these valleys. On the way back to the trailhead, just before crossing over the cascades, I hooked a right and found a beautiful hidden tarn. You could camp here and no one would even know.

I met one hiker who had come over the pass at Gilpatrick Mountain. Apparently this is a popular alternative route to get to Devil's Pass. I'm not sure exactly how it's done.

I also met a hunter and his son who told me that there is always a good chance of seeing caribou up at the top of the highest mountains in the region. He also let me know the mountain I camped near (before the saddle into Resurrection Pass) is an inactive volcano and the mound of rocks near the tarn was where it erupted. Since I had been there, the lake had dropped 2 feet. He told me 2 weeks ago that gas was bubbling up from the below and that's when the water dropped...cool!

Last weekend, I camped near that hidden Tarn. Due to our slowly arriving summer this year, it was still 1/2 frozen with lots of snow patches in the valley's. I camped on a knoll and had a stunning view of the entire 2nd valley. I had meant to day hike on the other side but when I set up camp, I was more in a mood to just read and relax.

Had friends in town and took them to the pass into the second valley and then we headed south into the 1st valley's cirques and tarns. It is really nice up there with a long spine like moraine overlooking the lower tarn. There are loads of waterfalls and cascades and the tarn is gorgeous! I definitely will come back this summer and camp on this moraine and then check out the upper tarn as well as go over the pass to check out the Devil's Creek side.

It was really great to set up a tent by the first valley's tarn. The tarn above this, where the cascades are coming from, is very small and rocky. The water flows underground to the cascades. The upper part was way too rocky to setup camp. Later on that day, I headed into what I thought was the pass to Devil's Pass but it didn't seem clear. There were, however, 2 more tarns, and this would be a very cool place to setup camp as the likelihood of anyone coming up there would be slim and the views would be amazing from your campsite.

There were no good places to tie up food and this is definitely bear country You may want to bring a bear proof canister. Speaking of bears, there is some tall grass and shrubs on the first part of the trail. Be sure to be noisy so you don’t take one by surprise.

The topo maps show the main valley with one lake. Due to beavers, there are now two. The second one is where you’ll veer left into the next valley.

The ranger, and other sources, tells me it’s real easy to miss the trail if you’re coming from the south on Resurrection Pass. My picture on the photos page from the saddle overlooking the Pass may help orient you. After you descend the moraine into the second valley, you’ll will be crossing the creek and hiking on the other side. A section of snow was covering this area and I didn’t notice it right away.

The trail would make a great, almost-loop hike with Resurrection Pass and Devil's Pass. If you didn't have another car, the two trailheads are only 3 miles apart on the Seward Highway. An overview link is provided on the Map Page. Car-wise, this would be a lot easier to deal with than the whole Resurrection Pass Traverse. You can do more of the Pass than just the section between the other two trails. 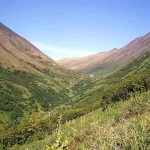 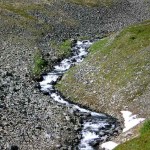 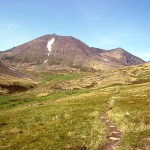 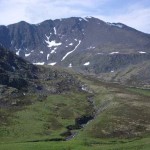 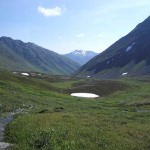 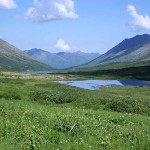 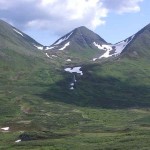 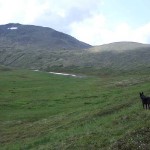 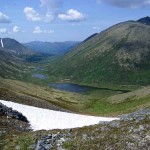 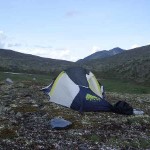 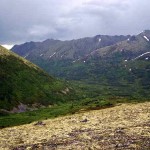 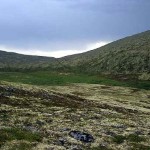 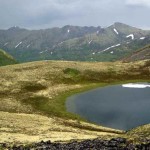 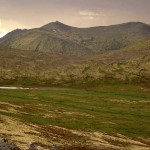 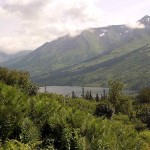 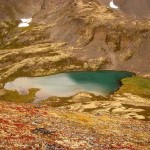 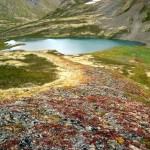 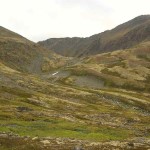 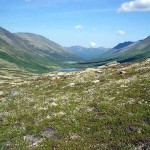