First off, I haven't done the whole trail. I have gone in about 7 miles for a winter hike to Caribou Cabin, but the little I've seen makes me want to do the whole thing.

The trail basically stays in the valley with great views of the surrounding Kenai Mountains. The best part of this hike is the different ecosystems you'll travel through, from aspen and spruce to tundra and muskeg.

The main attraction of this trail, especially in winter, are the 8 Federal Cabins interspersed for you to rent and stay overnight.

I hiked this weekend to the Fox Creek Cabin from the Hope Trailhead (11.5 miles one way). Saturday was perfect weather. Sunday was cloudy but it didn't rain till I was already in the truck heading home. I'm glad I got to finally do this hike again without a lot of snow (mostly).

The first part, to Caribou Creek Cabin, was mostly small ups and downs, where sometimes you're right by Resurrection Creek (pretty wide and fierce for a creek), and sometimes 500-1000 feet above. At one point when the trail is by the river, there is a whole network of beaver dams. While on the ridge, views of the river and surrounding mountains pop in and out. As you get further in, the views get better, except for mile 6 where a controlled burn was ignited a few years back. A little too post-apocalyptic for my taste.

You'll cross over Caribou Creek, just before the cabin, and then you'll be hiking on the other side of Resurrection Creek. Most of the trail to the Fox Creek Cabin was away from the creek and somewhat boring (with one major exception! - see below). You're mostly under canopy and there are few views along the way.

Fox Creek Cabin is nice but the view is kind of so-so. Most distressing was the seriously rude occupants beforehand who let their horses crap over all the area. It was pretty disgusting to see pile after pile right in front of the cabin, especially since there was a sign that tells you where to corral them in the back. Seriously, this has to be one of the most white trash things I've ever seen on a trail and I hope one day the perpetrators fall face first into a pile of manure.

I plan on doing the other 27 miles sometime this summer but all in all, I think I would rather stay at the designated campsites. It just doesn't feel the same to be indoors in a cabin. But that's just me (on the other hand, it was nice not to have to add more weight in the pack with a tent).

Last weekend, I came in from the Sterling Highway side (first time) and stayed at the Juneau Lake Cabin. After mile 4, the ground was completely covered in snow, but on the trail it was packed enough that I wasn't post holing. The first 4 miles as well are switchbacks to get up into the valley and then follows along a deep gorge. After you cross the bridge, the views really open up as you head into the wide pass.

Just before the Juneau Lake Cabin, I passed the Romig Cabin (on the south tip of the lake). Subsidence has caused the porch to sink in and I would avoid renting this one for awhile until they fix it. However, the Juneau Lake one is really nice, one of the nicest on the Pass I've seen so far. It's up a small hill with a great view of the lake and the mountains. The porch faces south for nice warmth (it was in the 40's). The lake was frozen solid but there were 2 canoes underneath the porch.

For information on renting and reserving the huts go to Recreation.gov.

If you're going to stay at the huts and using a sled, bring wood. I don't know if it was typical but when we stayed at the Caribou Creek Cabin, there was none. Finding enough under the snow was, at the least, annoying.

The reason why I haven't done the whole thing is because I haven't found someone who would want to do it with me so we can drop a car off at the other end. Your other alternatives are turning back or hiring a driver.

If you're hiking in winter, please educate yourself about hypothermia.

I've been backpacking up in Alaska for over 5 years and fortunately have experienced few mishaps. I feel that is because I pay attention to my surroundings and continually try to update my wilderness skills. But a momentary lapse in concentration almost caused me serious injury and I want to let you know what happen; not to scare you but to reinforce to you that the only way to really enjoy Alaska is to be aware.

As I was hiking this weekend, I did notice bear scat on the trail. The trail is very straight so since I could see way ahead of me, I didn't feel it was necessary to shout and make noise but did make sure I was always looking ahead. After a few miles of this, I started drifting into my own little world and started daydreaming. I turned a corner and there stood a black bear drinking at a stream. Not more than 10 feet from him, I let out an "Oh S**!"*. The bear was surprised!, and luckily was scared too and took off within seconds. I continued on the trail to the cabin and it wasn't till I was settled in, with the adrenaline wearing off, that I realized how lucky I was that the bear ran instead of attacked.

So please! When in forest or limited visibility, stay in your hiking world and pay attention! For further info about bears, go here.

There is a new shuttle service for transportation to and from the trailheads: Girdwood Shuttle, Tours and Transportation 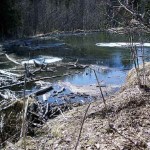 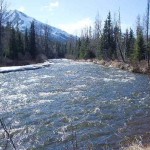 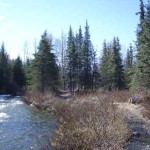 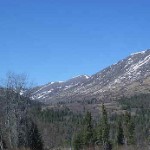 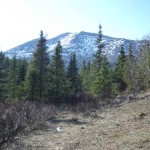 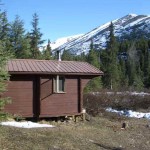 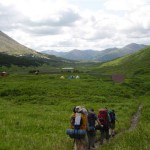 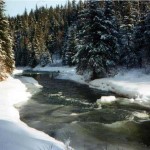 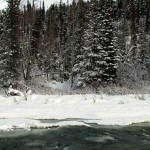 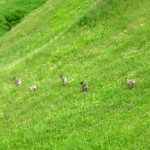 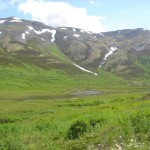 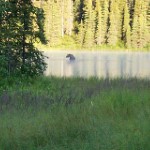 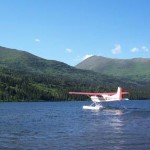 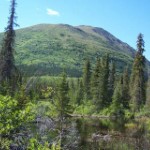 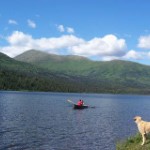 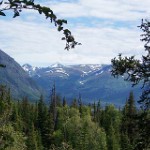 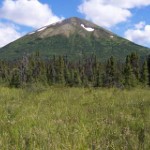 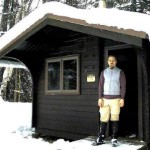 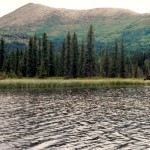 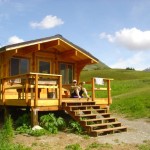