Tanaina Lake Hike is a wonderful way to see two beautiful valleys in the Chugach Mountains. You have the North Fork Campbell Creek Valley on the right and Snowhawk Valley on the left. You can take the Prospect Heights Trail to Near Point, then cross the North Fork Campbell Creek Valley to the north and gain access to the ridgeline that will take you to Knoya and T'Kishla, but I would recommend a different route. Crossing the North Fork Campbell Creek Valley is a whole lot of bushwhacking that you don't need to do, and you also don't have to pay for parking. You will be crossing onto the Military portion of the Chugach Mountain Range, so I would recommend calling the Fort Richardson Military Police, 907-284-0823, to check and make sure that there are not going to be any Military Exercises going on. I did find some MRE packages up there, so I figure that they do some training in that area...because I know that all of us would not leave any trash behind!

If you drive all the way up Stuckagain Heights Rd which turns into Basher Rd, approximately 5 miles, you will see a parking lot on the left-hand side of the road. There will be a pipe fence blocking you from driving into the Chugach. Park there, climb over the pipe fence and head to the right. That will lead you directly to the trailhead. The first 500 yards of the trail is a pretty decent downhill scurry. It can be really treacherous in the winter depending on how much snow has fallen.

That trail will lead you down to a beautiful little bridge and stream crossing, then a well traveled switch-back trail will take you up to The Dome. There are about 3 really steep pushes, not steep enough to call them climbs, but long enough that you have to push yourself. Otherwise it is a very easy going hike. Count on about 1-1.5 hours to The Dome. Once you get to The Dome you want to head Southeast to The Second Dome. You will actually have a very good view of the The Lookout from The First Dome, and could notice that you can side-hill to the right of The Second Dome and meet up with the Lookout, saving a little time.

Once you get to The Lookout, you cannot mistake the dinosaur back of a ridgeline that will lead you directly to Knoya Peak. Knoya Peak is the very first peak that you get to. Once you start getting close to Knoya, you will start to see T'kishla Peak on you right. You have to take a left at Knoya to get to T'kishla. If you continued past Knoya, without taking the left towards T'kishla, you would end up on Kanchee Peak. You can actually see the Snowhawk Valley cabin once you get on the ridgleline that connects Knoya to T'kishla.

The lake is tucked back perfectly behind T'kishla Peak and at the base of Tanaina Peak, but it still gets an amazing amount of sun.

Once you get to T'kishla, about 5-6 hours, instead of heading to the right as if you were going to camp at the base of Tikishla, just head left into the valley. I side hilled quite a bit, but you could just head straight down to Snow Hawk Valley. I chose to side hill because Snowhawk Valley looked as if it still had quite a bit of elevation gain from the point the you would end up at if you went straight down. Once you get on your way, just hug the right side of the valley and you will end up at the lake, about 2-2.5 hours from Tikishla. The lake is so clear, you could almost think you could drink straight from it. It is also amazingly warm for being tucked away at the base of Tanaina Peak. I would definitely suggest side hilling at least some of the way back to the ridgeline near Tikishla, if you don't, it will be a pretty steep climb.

Tanaina Lake would be a great base camp for a fun 3-4 day trip. There is Knoya Peak,4650ft, that you hit on the way. Tikishla Peak, 5230ft, that you could scramble to on the way, Tanaina Peak, 5207ft, staring at you while you camp, Kotkoya Peak, 5075ft, and Temptation Peak, 5350ft, just across Snowhawk Valley. And not to mention the scenery along the way. Plenty of sheep and ptarmigan. We also saw a black bear from The Lookout when we did T'kishla in July 2007.

Be safe on the trails and let's keep it clean!

In the summer...Up until you get to the little saddle near Tikishla where you head down into Snowhawk Valley, there is a nice little foot trail pretty much all the way. From about half way between The Lookout and Knoya, it starts to get a thinner and thinner and more and more rocky. There is always a way around the tippy-top of the big rocks along the way, but then climbing over the big rocks can be pretty fun. Before you get to Knoya and start making your way to Tikishla, if you decide to scurry around the North Fork Campbell Creek Valley side rather than all the way to Knoya, it is covered with a lot of loose scree. I would definitely recommend hitting Knoya and sticking to the ridgeline. Once you get to Tikishla and take the left into Snowhawk Valley, it goes from decent rocky footing, to loose chutes of scree, then to the mossy tundra. You will hit a very large rock bed with big rocks just before you get to the lake. Be careful, a sprained ankle would really suck at this point. Of all of the pictures I have put up on this page, they have all been from the Summer of '06 and '07.

I just got back from an overnighter to Tikishla on May 6th & 7th 2008. The trail was amazingly obvious and clear, having some deep snow patches along the way. The south faces of the mountains were still covered with snow, and were pretty soft, but not untraverseable. Tikishla was still mostly covered with snow with a few rocks showing in the ridgeline to the peak, and Snowhawk Valley was still covered in snow. From the looks of it, Snowhawk Valley won't be snow free for a month or so. Doing a day hike would be possible, but an overnighter would be the best, but not until June.

Having recently hiked the trail the beginning of May, the trail is going to be a little messy for another week or so. June should be perfect.

There is a mama black bear with two cubs that we've seen on Near Point already this year, and I know that mama black bear had three cubs the year before. There has been a big brown bear up in the area the last three years. I have only seen a black bear in the North Fork Campbell Creek Valley. There are a few caves on the North face of T'kishla that could make some nice dens for the bears. Make sure you have some kind of bear protection.

Plenty of sheep in the area. The males are pretty protective of the females. They will stand their ground. I had one walk with in 10 feet of me.

Calling the Fort Richardson Military Police would be a good idea. 907-284-0823. I recently talked with a member of the Long Range Surveillance Unit of the Army Guard, they told me that Temptation Peak and Tanaina Lake is an area they use for training exercises.

Tanaina and the mountains leading to them are in military lands. You will need to get a permit to hike there and let them know. Go here for more information.

There is no charge to park at the Basher Rd. parking area. 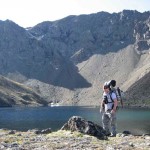 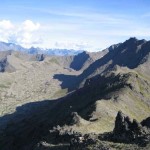 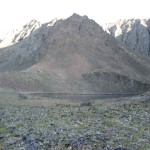 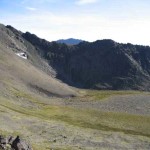 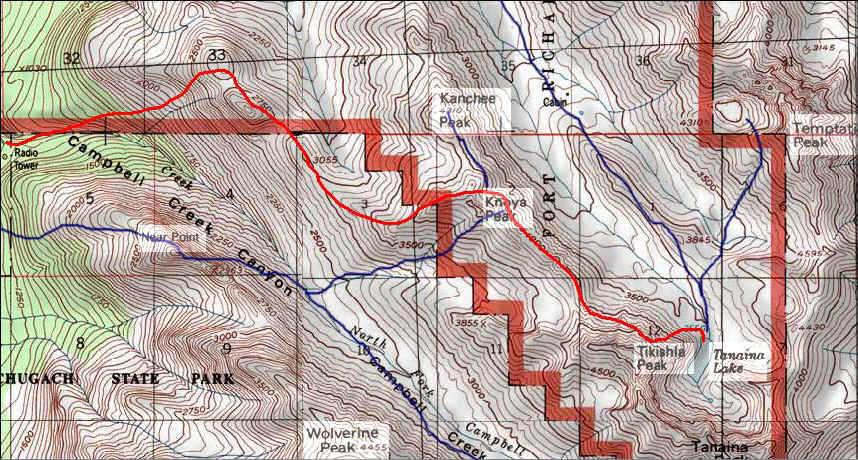